I have been crocheting since I was twelve years old, mainly making blankets for baby showers or family members and almost always following a pattern. It wasn’t until pinterest came around that I discovered Gegecrochet’s beautiful Mario blanket that she made for her husband. By a momentary lapse in judgement I showed my sweet husband (who is a HUGE video game fan especially of Super Mario Bros 3) her awesome blanket which sent me on my very own labor of love. Little did I know that it would take me 6 years to make his blanket due to much trial and error. 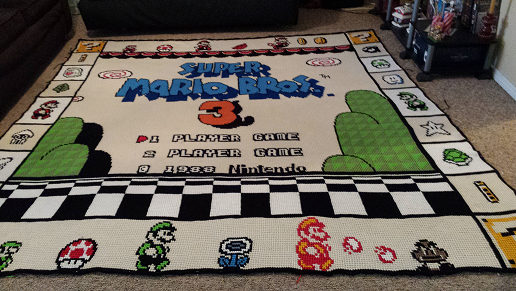 I scoured the internet looking for the perfect screenshot to start a pattern from. I started making the blanket in panels which I thought I would be able to seam together to make it more manageable to work. Much to my dismay, when I began to seam them together I despised the way that they looked because you could where the seam was and it ruined the overall feel for me. 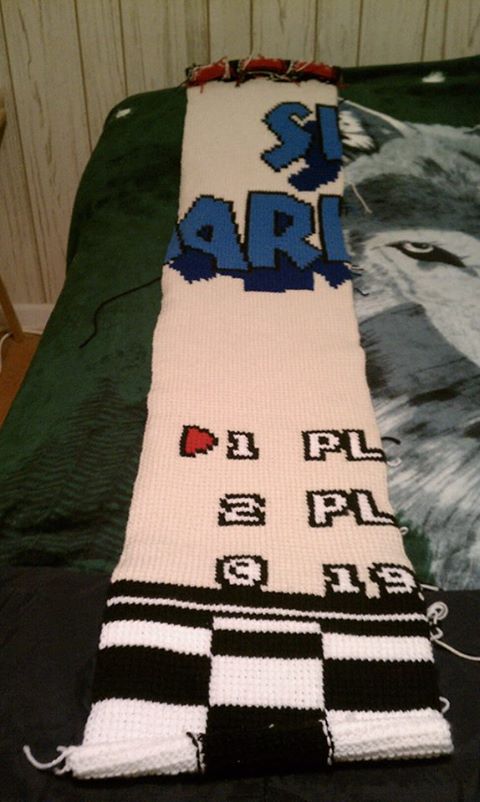 So I decided to redesign it and make it all one piece to give it that seamless feel. My husband helped me to handpick the sprites on the side and dreamed up the progression panels at the top and bottom. Thankfully I came across Sprite Stitch which had the links and patterns for all the sprites I used as well as tips on how to make your own patterns. We both watched in amazement as I worked and began to see the picture unfold. It looked as though we were staring at the start screen (after all that was the plan!) Now it was onto the daunting task of all those ends!

Since I chose not to weave in the ends as I went, I decided I wanted to sew a fabric on the back since the thought of going back and weaving the ends gave me crazy amounts of anxiety, we chose to use a checkered fabric to keep with the Mario feel. It took a year to decided which fabric and to figure out how I was going to add this to the back. After all what’s one more year when you’re working on a masterpiece. 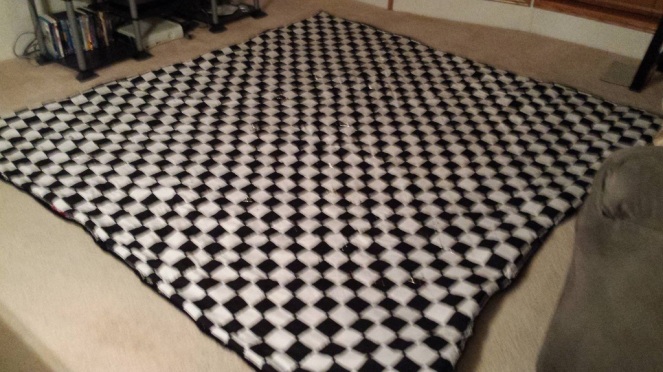 So I bought some batting and a few yards of fabric and I began to task of sewing the backing together. I pinned down the batting and placed the checkered fabric over top pinning it in place and set to the task of hand sewing it together. After all that work there was no way I was going to let a sewing machine near it, for fear it would tear something apart. I spent weeks on the couch, bingeing on Gilmore girls sewing the back to blanket trying fervently to complete this monumental task since our oldest child was due to arrive within a few months. We loving teased that he couldn’t arrive until after I finished the blanket, which fortunately he obliged!

So grateful that I embarked on this blanket making journey with a little help and inspiration from all those other crafters, hopefully you’ll be inspired as well.

This site uses Akismet to reduce spam. Learn how your comment data is processed.

Where I share my quilting and crafting journey with a little travel thrown in!

And whatever else I have been up to...

The Art and Craft of Blogging